Apologies for my uncharacteristic silence over the last two weeks. I was back home in Ireland, showing Daithí off to all our of our families and friends, and enjoying having babysitters (ie. Grandparents and Aunties) fall over themselves to take Fionn off our hands for days and nights. Naturally, we got pissed!

It had been six months since I was last in Dublin, the longest I have gone since moving here, and my god had I missed it.

We decided to drive, because a baby and a toddler require so much stuff, and because now that Fionn is over 2, we have to pay full cost for a flight, so the boat actually worked out cheaper. It was a long bloody day though. The plan was to leave as soon as Fionn woke up, and drive until Daithí needed feeding. Typically it was a day Fionn woke at 6am, and Daithí didn't seem interested in boob at all. So we hit the road, and got as far as Cheshire Oaks (115 miles away) by 9.15am, unfortunately it being a Sunday, nothing was open till 10am. For once in my life I was early!

We made it to the boat in plenty of time, then came the 4 hour crossing. Shane ran around after Fionn,  (It tuckered them both out) I sat with Daithí, until we began to dock and we just had to go up on deck.

I don't know why, but I got stupidly emotional. I was bringing my family home. My home. Not theirs. They're British born citizens, Nuneaton is the only home they've known and that breaks my heart. It stirs all the longing to move back, and bubbles to the surface the confusion I feel when I think of 'home', where I grew up and where my kids will grow up.

All this has been magnified as of late because of the xenophobic and hate filled, fear mongering excuse for politics that is the 'Brit-ex' campaign. I don't feel welcome where I have made my family home, and I want to go home home.

But the ramifications of that is a conversation for next week, when we know how the nation has voted. For the record I will be exercising my right to vote, a privilege not afforded to all EU immigrants, living lives, raising families, and contributing to society here. I will be Voting to remain.

As well as getting to show off the newest member of the Canavan Clan, getting to watch the football in Ireland was a nice added bonus, despite the score, and the dreadfully boring defensive first half of the Belgium game, just being in Gibney's of Malahide, and having a laugh with other Irish people was so refreshing. Whether at home, or over in France, we really are the best fans in the world. Shane was happy for the proper pint of Guinness too.

If the two weeks in Ireland has done anything, it has re-light my desire to move back. It may be more heart over head, but I really think it's started the wheels turning.

I miss people watching in cafes in Dublin City Centre, I miss the customer service in shops in Dundrum, I miss bumping into people I know and standing and chatting for ages. I miss saying 'Hello' or 'Good Morning' to everyone you pass on the street. Although I didn't know it before I left, I miss parents having the chats in playgrounds. I feel I'm depriving Fionn and Daithí from a childhood of playing with their cousins and going on days out and trips with their extended family.

I am not disillusioned however, I know Ireland has it's problems. Homelessness is worse than I remember it, one walk through town was enough to remind me. The housing market is beyond ridiculous. There have been less houses built in Dublin in the last year, than any year since the 60s. This lack of supply is keeping prices artificially high, I know if we were to sell our house here, it would just about be enough for a deposit for a house there. The HSE is also a farce compared to the NHS; womens' reproductive rights haven't moved on from the stone ages. And the education system is still in the choke-hold of the catholic church.
But...But people are sound, and talk to each-other, and the craic is mighty.
And the sausages are great.
And my Mammy is there.

Most people know they can donate blood, you often see blood drives in local schools/ community centers, even leaflets come through your door asking for donations if national stocks are particularly low. But not as many people know human breast milk is a sometimes even more vital liquid requiring donations.

It is one of the most valuable commodities on the planet, and can mean the world to premature and seriously sick newborn babies. Breast milk is the only thing many tiny babies can digest, but when they are born before their mother has the chance for her own milk to come in, or if she is unable to, or chooses not to express, she must rely on donations.

Granted most people would not be aware of it, because unless it affected you directly, there isn't exactly a conversation about it, but perhaps there should be. It took a neighbor of my Mam's, who is a Blood Biker in Ireland to tell her about it, who in turn told me when I had an over supply on Fionn.  I then had to go searching for information on how to do it. Eventually I got in touch with the Birmingham Womens' Hospital and they got me set up.

With Fionn, as he was my first I had to wait until he was 6 weeks old, so that we could establish his feeding, but I could donate right up until he was 6 months old. This is because my milk would have changed to suit the growing needs of an older baby. The milk bank needs milk produced for a baby as close in age to those receiving it as possible.

They ask that you don't drink excessive alcohol or caffeine, or smoke or take drugs. The caffeine was the hardest part! I also needed to have a blood test done, to test for anything that could pass the milk and harm a new baby.  Trying to explain to the nurse who took the blood that I had to take the sample home and send it off with the milk proved quite difficult. She had never dealt with anyone who had donated milk before, but with some persuasion she agreed to let me.

This time round, as I had donated before and had bottles left over from the first time, I was able to store my excess from day one. It was quite nice talking to the woman in the milk bank again. She recognised my name from the last time (and probably accent, but she was too polite to say), and said it was lovely to get to tick the 'has donated before' box, as it's not very often they get to do that.

The milk bank I donate to works closely with the Midland Freewheelers, a branch of the Nationwide Association of Blood Bikes in the UK. A voluntary emergency rider service. They do the pick ups completely free, which saved me a journey into Birmingham.

As the milk can only stay in my freezer for 12 weeks, and we're off to Ireland for two on Sunday, I asked for a pick up this week. Fionn could not have been more excited for a bright yellow motor bike with sirens to pull up into the garden. He jumped up onto the sofa and waved out the window and shouted 'hello Flynn' over and over. (For non-parents, Flynn is the fire engine in Thomas the tank Engine, so now every emergency response vehicle we see, is called Flynn) He wasn't too impressed with the scary High-vis wearing man who came into the house. He was far from scary, he was lovely, he offered to show Fionn the blue lights and let him sit on the bike, but Fionn was having none of it. He screamed and clung to my neck the entire time. Typically, as soon as he had left and the door was closed, Fionn jumped back up on the sofa and waved 'Bye-bye Flynn'. Kids!! 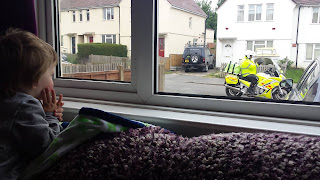 The Milk Bank provided sealed sterile bottles and labels, and ask that you donate a minimum of 20 100ml bottles. I've filled 30 bottles so far, and hope to have another collection of the same before Daithí is 6 months old. I am lucky that the majority of this comes from collecting leakage while I'm feeding, and doesn't require too much effort with pumping. But even if it did, the small amount of effort from me, can make the world of a difference to a baby who really needs it.
Posted by Oh Boy Story at 07:49 No comments: