The Things we do for parkrun At 8.45 on Saturday morning, a stranger pulled up outside the guest house I was staying in and I got into her car.

Now, I wouldn't normally condone getting into strangers cars, but we do some crazy things for parkrun. Let me expand a little on this story. I had contacted Lough Key parkrun via Facebook a few months back, knowing I would be travelling from Bedworth, UK to Carrick-on-Shannon for a hen weekend. (My goal is to run 50 parkruns this year, so I couldn't let a pesky little thing like a hen get in my way.) Well, the wonderful Patricia KELLY MCGARRY, had no issues and set off to arrange a lift for me. 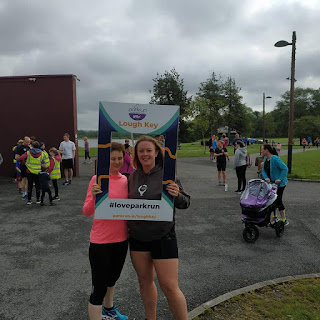 That's where the awesome Colette CASSIDY stepped up. At first it was a lift from the service station up the road, but then it transpired she only lived around the corner, so could collect and deliver me door to door. I'm not sure if it's a parkrun thing, or and Irish thing, but where else would you get service like that?!
We normally start at 9am in the UK, so I enjoyed my extra half hour in bed, especially considering we fell out of Murtagh's only a few hours previous.

Upon arrival at Lough Key, I could see this was going to be a friendly group, everyone said hi, and Colette introduced me to all her running friends. There was a real sense of family about the place. And then there was the scenery. Oh, wow! The views of the lake and island were breathtaking.

As we all marched down to the start line, I knew this was going to be a run to remember. I decided to take it fairly handy and to take in my surroundings. 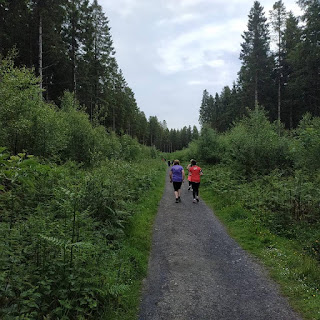 The course it's self was a beautiful maze through shaded forest paths, over a little bridge lead us on to Drumman's Island, lending to such tranquil views of the surrounding waters. The quiet lapping of the water, along with the birds singing was the most beautiful backdrop to run to. Back on to the main land as it were, and there were more twists and turns, on slight inclines and declines, some uneven footings, but mostly packed trails, the birds continued to sing, and the smell of fresh garlic filled the air.
There were wild flowers of every colour lining the beaten tracks, bluebells and lavender, buttercups and thistles, daises and dandelions. It was a real treat for all the senses.
I've never been lucky enough to run somewhere steeped in nature, and I have to say, although it was tough, I loved every minute of it.

Then it was on to the cafe, a bustling and friendly place. I enjoyed a coffee and the chat. I'm never sure which part of my Saturday morning I enjoy more actually, the run or the chat. This week I was little apprehensive as obviously I didn't know anyone, but I was made feel so welcome. That's the wonderful thing about parkrun, for an hour of two a week, people from all different walks of life come together, they chat and laugh and lift each-others spirits, and I have to say Lough Key was an absolute tonic.

And now this is my favourite part, being the stats-geek that I am!

177 people congregated at Lough Key for event 156
Almost an equal Male:Female split 92:85
18 people were new to the course, of which 6 were new to parkrun (welcome to your new obsession!!)
Despite an incredibly warm and humid morning, an impressive 23 people achieved new PBs
To look at the first three finishers, someone might have been mistaken it was a race not a run, and not the other way around, with only 11 seconds between them.

Darragh MCCARTHY (18:43) was on fire, not only first finisher, but achieving a PB, hot on his heals was tourist John SLATER (18:45) for his first visit to Lough Key, and breathing down his neck was John GILBANE (18:54) as third home, and a brand new PB for his efforts.

Marie T DUGGAN (23:12) was first lady home, on her first run of the course. Catherine FLYNN (24:01) was second lady across the line, bagging her own PB, and first timer Aoife SLATER (24:30) rounded off the top three ladies.

I always love seeing how many children take part in parkrun, and this week was no different. The Junior were FAST!!

Unfortunately 28 people registered as unknown, #DFYB, as no barcode, no result

I would like to take this opportunity to thank everyone I met on Saturday morning. You are a credit to your community and the parkrun family. I'm already looking forward to my next visit. 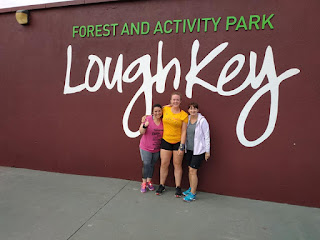