I feel like the bottom has fallen out of my stomach this week, I just can fill it up. It could be the pregnancy, not getting sick is so alien to me, so I don't know if this hunger is normal or not. Bump is starting to twinge though, so it could be him.

It could also be the breastfeeding, Daithí's teething so I've been up all night feeding him, more than I've been feeding him in a long time. So sleep is a rarity for me. I think the reason I don't sleep well anyway when Shane is on nights, is I get serious isolation anxiety, being in the house by myself over night with the kids. It feels like far too much responsibility.

I had a bit of a wobble this week, emotions got the better of me and I had been eating my feelings. Slimming World came to the rescue yet again though, I had walked into the meeting late, I wasn't gong to stay, I wasn't feeling it. Somehow I managed to lose 3 lbs so I stayed and I am so glad I did. We had a very emotionally positive and inspiring group, which has given me the motivation to really tackle this week head on. I need to take this week one meal at a time.


I realised that despite how helpless, and tired and utterly unmotivated I've been feeling, I have actually achieved a great deal in the last few months, and am doing quite a lot for myself.
I had pilled on the weight with Fionn, lost it, then pilled it on again after Daithí. I was using that as an excuse to do nothing. I was lacking any sort of confidence or motivation, and had kinda accepted that that's just what happens when you have kids.


But after being refereed to Slimming World and the gym by my health visitor, I've been feeling so much better in myself. and I've started saying yes to everything. Things I'd never had dreamed I would do. The Wolf Run, Surfing, and The Kerry Challenge next month.

Food has always been my emotional crutch. I always struggled with my image and weight, and pined my self worth on how I looked. Slimming World is slowly changing that for me.

I'm not saying I feel great, far from it, honestly I'm a wreak atm, I'm really struggling with this pregnancy. I haven't gotten excited, I haven't even really been acknowledging it. Shane hasn't been either, and I think that's contributing to how shitty I'm feeling.

There's also so much with selling the house and buying a new one, that's not exactly stressful, but mentally exhausting and emotionally draining. I'm trying to not let it get the better of me, and am just focusing on our trip home next week, and the few days away from the kids, hiking in the Kerry mountains. I think the break will do my mental health the world of good. 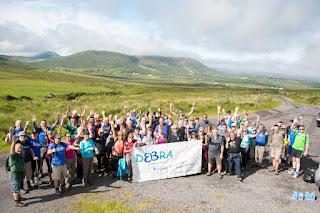 The Kerry Challenge, is a 75km hike, over 3 days in the Kerry mountains, in aid if dEBra.
The charity helps and supports families of children and adults living with Epidermolysis Bullosa.
EB is a genetic skin disorder that causes the skin to blister and tear at the slightest touch.

Our GoFundMe page can be found here.
For more information about EB click here.

I turned 27 this week and things are all becoming very real and grown up and I don't like it.
I'm slowly coming to terms with the phrase unplanned pregnancy.

Yup, that's right, baby number 3 is on the way, and although we had most definitely planned on another baby at some point in the future, this has come as a bit of a shock. I hadn't gone back on the pill after Daithí was born, because it fucks with my head, and I'm fairly sure it played a part in my PND with Fionn, so we decided to use alternative methods of contraception. Yet, somehow, with condoms, and me breastfeeding, I've only had one period since Daithí was born a year ago. I still managed to get pregnant.

On my first two pregnancies, I was sick from day one. The sickness never stopped, but got progressively worse until the boys were born, then it magically stopped. I was so bad on Daithí (you can read about that here), Shane made me write a letter to myself to talk me out of ever wanting to get pregnant again should the mood have struck.

This time however, I've been fine. Like totally fine, so fine I'm still not actually convinced I'm with child. What prompted me to do a test was my reaction to Shane asking one day when I had a bug if I could be pregnant. I nearly ate him. 'How the fuck could I be pregnant, What the fuck are you talking about, fuck off'. This massive over reaction made me think, shit, I might be.

I think it was bad timing, because he was sick, proper bells and whistles, in a shit mood for almost a month, man flu. I can feel my eyes rolling just typing that. But his apparent, complete lack of interest made me want to slap him and yell 'suck it up sunshine, it's not your body going through a 3rd pregnancy in 4 years'. But I didn't, because I'm nice, and I need to work on my sympathy face, and bed side manner. Wanker.

So we've been to the midwife, had a scan, everything's fine bla bla bla. I'm continuing with the gym, Slimming World (it's supported by the Royal College of Midwives) and Breastfeeding (despite Shane being on at me wean Daithí, I have no intention of stopping - the 'support' conversation with him is one for another day!).

I also decided to stick to my plan of doing The Wolf Run I had signed up to a few months back. It has been a personal goal of mine for quite some time, and I am so glad I achieved, before I turn into a giant preggo whale again and can't run for another year.

From a practicality point of view, the pregnancy has meant we need a bigger house, and that means a longer commitment to England. I'm still not sure how I feel about that, but I'll get to that another time. I don't have time for emotions right now.

Our house went on the market this week, and we're viewing more houses than I can remember. Trying to get my head around Stamp Duty, and Mortgages, and Legal Fees etc. etc. etc. is making my brain want to cry. Ok, so we've bought a house before, and that was bloody stressful, but adding selling a house to the mix is just head melting. There's also needing to have to done before this baby arrives, as I really don't fancy moving with a new born.

I really wish there was a class you could take that just explains in lay-mans terms what everything means. 'predictability', 'chains', 'conditional offers', it all means SFA to me, but you don't want to let on you  know nothing, because then you could be conned, but seriously, like, what's the difference between a 'decision in principal' and a 'mortgage in principle', and why do they put negative marks on your credit score?

That's another thing I haven't managed to understand since moving here. My bloody credit score, I know what it currently is, but I couldn't tell you how it got there, or how to make it better.


The one thing I am grateful for is that the puking hasn't started. Yet. Everyone say's this must be a girl so, but, I'd be quite happy with 3 boys, we shall see. I don't know if it's breastfeeding hormones that are protecting me from the horribleness of it all, of if the last 6 months of Slimming World has helped me more than I know, (this is the first time I'm not starting off a pregnancy with an obese BMI.) What ever it is, I'm afraid to change anything!!

I'm hoping to write a bit more, but if it's a toss up between blogging and going to bed at 7pm, I'm going to bed!!