This is the full piece I wrote for HerFamily.ie
They didn't edit much to be fair, but I think this sounds a bit more true to my voice.

It's been the Longest Week, and it's Only Wednesday

So I might have been a little too hard on myself this week, and beat myself up a bit for not being more organised with the kids going back to nursery, but after a very positive appointment with my mental health team ('finally', I hear some cry!) I'm going to focus on what I have achieved this week.

Monday I got Fionn, Daithí and I home safe, by myself on the boat.
It was a 8.45am sailing, so I packed the car up the night before, topped up the Oil, Diesel and checked the pressure in the tires, ready to hit the road at 6am to make sure I was there good and early enough to get a decent spot. 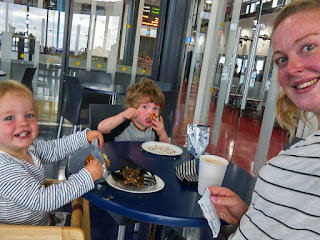 Typically it was the one morning both kids were still snoring, and I had to lift them straight into the car.
We had a nice breakfast in the terminal, and managed to get a table on the boat. Luckily beside a family with two kids the same age as mine, on their way to Thomas Land. 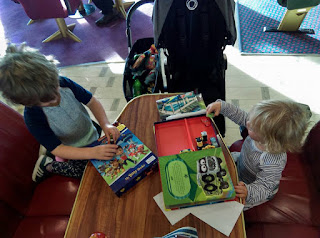 Much like blokes can instantly bond over a pint and a football match in the pub, 3.5year old boys will instantly bond over juice and Thomas the Tank Engine. Fionn shared all this trains, and told them everything about his favorite place in the world. I was so proud of his communication and sharing.

The drive from Holyhead home was actually grand, and I made good time. I was quite proud of myself, not something I frequently admit to.

Tuesday I chased the bank, solicitors and estate agents, and finally got an exchange on the house, movers booked and paid for, and kids nursery sorted for the year. I had to laugh when my cousin commented that after weeks of delays, I was back in the country a day and everything got sorted.
I should have come back sooner!!

I also managed more packing and sorting in the 48 back in England than Shane has in the 6 weeks I was away, so I'm marking that up to a win for me. I've been shit at talking to friends, but I have spoken to every single one of our service providers and sorted out the change of address with practically everyone. All that's left are the people who refuse to talk to me because accounts are in Shane's name, but I've written him a list. I do love a good list!!


I genuinely feel like the entire burden of the move, and pregnancy and everything that goes with it has been weighing on my shoulders but I could feel it physically lighten once I got confirmation of exchange. Now there'e the actual move to contend with. I'll be here by myself, so I can coordinate everything, so I'm hoping it goes much smoother than the last 6 months of hic-ups.