Our Month in Ireland

As my month in Ireland is coming to an end, it's struck me how completely different a trip I actually had compared to what was planned.


The bump has appeared for sure! But we've been up to a lot more.

We were supposed to be moving house back in July, so I planned to take the kids to Ireland for a few weeks, and let Shane deal with the move, get the building work done, and have the house pretty much ready for me and the kids to come back to. If the last move is anything to go by, I'm a terrible pregnant person who doesn't know how to not lift boxes/ carry things/ etc.

Of course, that's not how things have panned out. We're still waiting on a confirmed move date, we're hoping it will be early September, but with how completely rubbish our solicitors and estate agents have been, I'm not holding my breath.
I need to take the kids back next week so Fionn can start pre-school with all his friends. He's also been invited to his first birthday party from nursery. I really don't want him to miss that transition, especially with all the changes he has; new baby and new house, coming in quick succession. If I can make the nursery to pre-school transition, as easy as possible, I think it will do him good.

I really thought I'd get the chance to write more while I was here, I had been planning everything out in my head, but although I've had loads of people to lend a hand with the kids, not having them in nursery, or in child proof houses has meant it's a bit more full on with them. I've had the odd hour here or there, but the two of them together is a hand full, and a lot to ask of someone to mind. I've been prioritising baby sitting hours with sleeping, and chasing up solicitors/ estate agents/ etc. for the move. 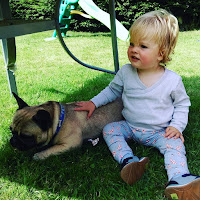 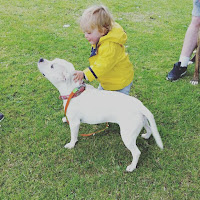 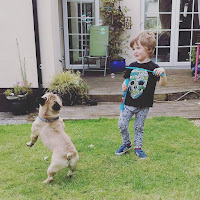 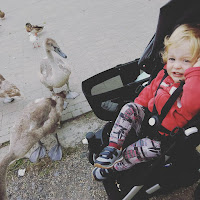 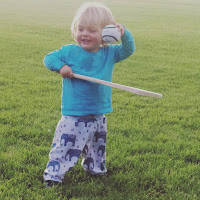 We've made some great memories though! We've had the chance to go to family events we would have otherwise missed, and because we've been here for so long, we've had time to go actually go to new places, and spend quality time with friends without being rushed. 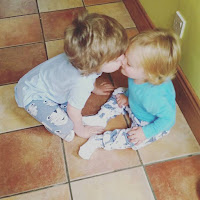 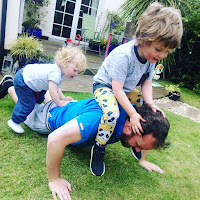 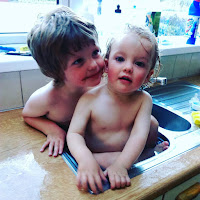 We've made friends with dogs and ducks (as well as some new human ones!), we've been to possibly every playground in Dublin. As well as every shopping center. We've been to funfairs and museums, and spent hours playing in the garden. 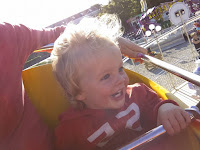 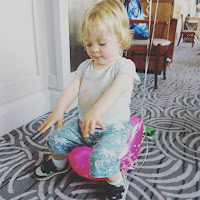 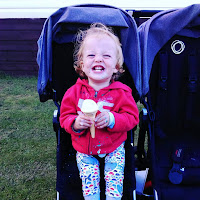 The kids absolutely love playing with my sisters and their partners, and my parents get so much joy from spending time with them.

I'm fairly sure my Da takes the kids for a walk in the hope he'll bump into someone he knows so he can show them off. 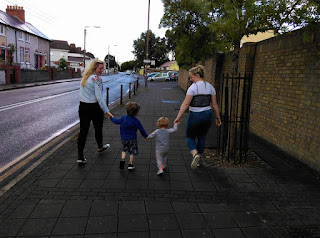 Daithí has come on so much in the last few weeks, I can hardly believe it.
His speech has definitely developed an Irish accent, and his interaction with other people, family, strangers (and dogs) alike is adorable. He says 'hello' to everyone we share a lift with, and tries to hug every dog he passes. I've managed to steer him away from all but one strange dog, who he managed to get both arms around in a full bear hug, while the little mite was being carried like a rag doll by his 7 year old owner.

While looking through pictures with him today, I asked Fionn today what his favorite part of the whole holiday was, he said 'Playing with trains'. Now there's a surprise!!

I'm still feeling so massively overwhelmed by the fact I am due in 10 weeks (so any time in the next 7-12 weeks), and we still don't have a move date. I'm taking the kids back to a house that has essentially been dismantled in preparation for a move. And the likelihood is I'll be doing the trip by myself.
Furniture, including sofas, that we weren't planning on taking with us to the new house has been dumped. Shelves have been taken down, wardrobes unscrewed from the wall, and the attic emptied. I'm anxious there will be a delay on the day, and we'll be left stranded.
I'm OK with making the journey back by myself with the two kids. I'm surprisingly OK with it. Other people seem to be freaking out at the prospect. It's funny, I feel like I can do anything by myself with the kids, because it's what I do every day, and I have some level of control over it. It's everything else outside of me and the kids that I panic and stress about.

Everything is still so up in the air, I feel like I've reached the stage where I can't adult anymore, so I just have to say 'fuck it'.
I'm meeting a good friend for dinner tomorrow, another on Saturday and I'm going to my first All Ireland final on Sunday, so in the absence of a rake of pints, I'll be having copious amounts of food and pretending everything is fine!

For now, I'll leave you with a selfie from 5.45am this morning.
I'd been up with Daithí since 4am. He saw me check my phone, pointed at it and said 'Cheese'. 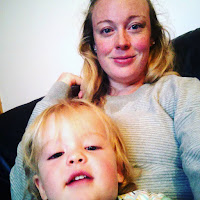 The End of Another Breastfeeding Journey

It looks like I have come to end of my breastfeeding journey with Daithí.
Sooner than I would have liked, but still long enough to be proud of.
17 months and 29 weeks pregnant isn't bad, I don't think.

I didn't intentionally wean him, I was back in the UK for a day for a midwife appointment, and with flights and everything it was 48 hours I didn't see him. I got back to Ireland, and he just didn't really look for it. Not that there's any milk left anyway at this stage.

The pregnancy has been draining me, and I have been getting low blood pressure spells where I feel like I'm going to pass out, so it's probably for the best, but it's still an emotional time. It's nice to have my boobs back to myself, well for the next 11 weeks at least!! 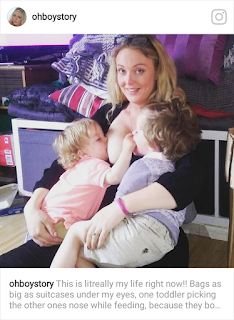