Running and writing are the two things I find most cathartic, so what better way to shake off the stress of moving country, than combining the two for one last time, running at my home parkrun of Bedworth event #72 and writing a farewell run report.

This week I got to deliver the first timers briefing, as a last timer, to 20 people new to the course, of which 8 were new to parkrun. And  got rightly embarrassed by RD Ann-Marie CURRIER in-front of everyone as I was called up in her run briefing. It did make me realise though, that people might actually miss me, not just the other way round.

185 people congregated at The  Miners Welfare Park park for event #72, the runners were almost evenly split with 99 men and 86 women taking part

It was regular runner Anne JOHNS (33:31) who encouraged me to come to Bedworth for their 4th event back on 17th February 2018. It was snowing quite heavily and I wasn't sure if I could even run 5km, but I did, and from there an obsession and friendship grew. 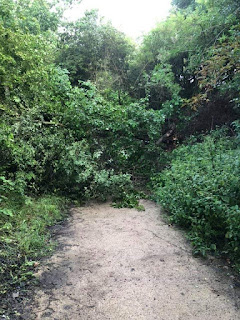 This week wasn't without it's obstacles, quite literally, as it was brought to our attention on Friday that a tree was covering the trail section of the run. Thanks to the quick acting Lea CULSHAW and Richard HAMBLETT the council cleared the path, and pre-event set up extraordinaire Richard ARNOLD and Pete MARSHALL didn't have to get the saw out. I'm not sure if they were disappointed or relieved. Despite this It was the perfect morning for running, light cloud cover and a slight breeze on a mild morning, this was reflected in an impressive 45 people achieving a PB

First timer Tom PAYNE (17:19) was first home setting an age category record for SM20-24, fellow first timer Alex Bruce (17:20) was second, pipped to the post by a single second. Breathing down their necks was Mark SHEPHERD (17:29) who came in third. Mark was the most experienced runner on the course today, with an impressive 394 runs to his name.

The last 9 months I have found solace in Bedworth on a Saturday morning. I more often than not arrived with 3 kids in tow, and no-one ever batted an eyelid. On days when I questioned my sanity leaving the house with 3 boys, 5 and under, the team at Bedworth always made me feel at ease and so welcome. I always love seeing how many children take part in parkrun, and this week was no different. The 23 Juniors who took part absolutely smashed it!

I've ran at Bedworth 28 times, and each time without fail, Ted FRANKLIN was on his corner offering support and encouragement. This week was no different, so for the 84th and last time I passed him, I had to stop and give him a hug to say thank you.

A big congratulations needs to go to Susannah URSELL (30:04) on completing her 50th run.

Tail walkers this week really were tail walkers as Laura CAMSELL (58:09) and Zoe COPE (58:08) were joined by their pooches. I'll forgive one particular four legged friend for his parting gift to me on the First Timers placard!!

I like to take this opportunity to thank everyone I have met at Bedworth for the last 68 weeks of friendship, laughs and running. I'm sorry I couldn't name everyone, but weather you know it or not, you have helped me though a tough year and I'll always hold you in a special place in my heart.